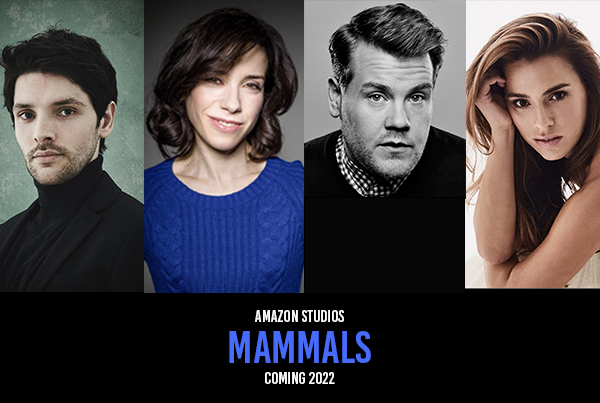 Mammals is produced by Street Hassle in association with Vertigo Films and Fulwell 73 for Amazon Studios, and will launch exclusively on Prime Video in over 240 countries and territories.

Details on the storyline of the new series are being kept a closely guarded secret, however writer Jez Butterworth gives us the following clue – “A good marriage is the most magical thing. In a world of eight billion, you’ve found the one who gets you, ignites your body and soul. Who allows you to grow and flourish. Who gives you the spark, the confidence to become you. You’re also never going to have sex with anyone else, ever, and then you’re going to die, and be dead forever.”

“James Corden is the only ten-time Emmy winning chat show host to also win the Tony Award for Best Actor,” said Jez Butterworth. “His performance in One Man Two Governors was like seeing Mickey Rooney, Terry-Thomas and The Marx Brothers rolled into one. His Smithy in Gavin and Stacey is for the ages – he took a needy, big-hearted mess of a supporting character and made it iconic. But neither is a patch on his Sea Monster in The Late Late Show “Shape of Water” sketch with Sally Hawkins. Google it.”

“I am jubilant to be working with Sally again, and Colin Morgan too,” added Butterworth. “Alongside the astonishingly talented Melia Kreiling, they make a team of world class story-tellers.”

“Having seen all his plays, and having worked with Jez on three seasons of Britannia, I know that there is no better storyteller in the world to shine a light into the darkness of relationships.” said James Richardson, Executive Producer and Co-Creator. “And no more talented, fearless, or funnier actors than James, Sally, Melia, Colin and Samuel to portray our leads.”