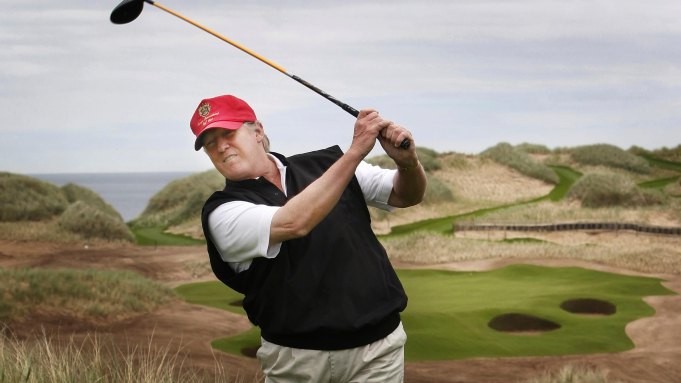 You’ve Been Trumped, the 2011 documentary chronicling Donald Trump’s disruptive efforts to build a golf course in the middle of a treasured Scottish nature reserve, has been optioned for a TV series dramatization by Bulletproof and Britannia outfit Vertigo Films.

The show will retell how the Trump Organisation caused a storm in the local community during its eventually successful bid to build the luxury resort. Many of the residents resisted, including farmer Michael Forbes who was awarded Scotsman of the Year in 2012 for his efforts, beating the likes of Andy Murray and Billy Connolly. The film debuted at Hot Docs and went on to screen on the BBC, despite Trump’s lawyers threatening to sue the broadcaster.

Director Anthony Baxter released two sequels to the film, initially 2014’s A Dangerous Game and then in the run up to the 2016 U.S. election, You’ve Been Trumped Too, which focused on the problems experienced by the neighbors of the then-constructed Trump International Golf Links, including a 92-year-old woman who claimed that she was forced to collect water from a nearby stream in a bucket after construction workers had cut off her supply. Trump’s legal team also threatened to sue anyone who screened the latter film.

Director Baxter will be involved in the drama series, via his company Montrose Pictures, alongside Glasgow-based producers Blazing Griffin, which previously teamed with Vertigo on the UK release of feature project Anna And The Apocalypse. The producers are now in the process of attaching a writer to the planned eight-part series.

“As I followed the local heroes of Scotland standing up to Donald Trump in the David vs Goliath of You’ve Been Trumped, fact seemed stranger than fiction. And few writers could possibly have envisaged what would happen next. So I’m delighted to be a part of the incredible team turning the extraordinary story of Trump in Scotland into a gripping landmark drama,” said Baxter.

Vertigo has established itself as a key UK drama producer with its pair of Sky shows, Britannia, now in its third season.

“I am thrilled to be working with Blazing Griffin and Montrose Pictures on bringing this astonishing and heart-warming true story to a world-wide audience. It’s a potent and shocking study of the corrupting and intimidating influence of power versus the sheer indefatigability and single minded spirit of ordinary decent people,” said Vertigo’s Allan Niblo.

“After working with Vertigo Films in 2018 on Anna And The Apocalypse, we are really exciting to be working alongside them again. This is an important Scottish story with global resonance, and Vertigo are the UK’s best producer of high-end TV so we can’t think of anyone better to be working with to bring Anthony Baxter’s highly acclaimed and incredibly revealing documentary to television,” added Naysun Alae-Carew of Blazing Griffin.